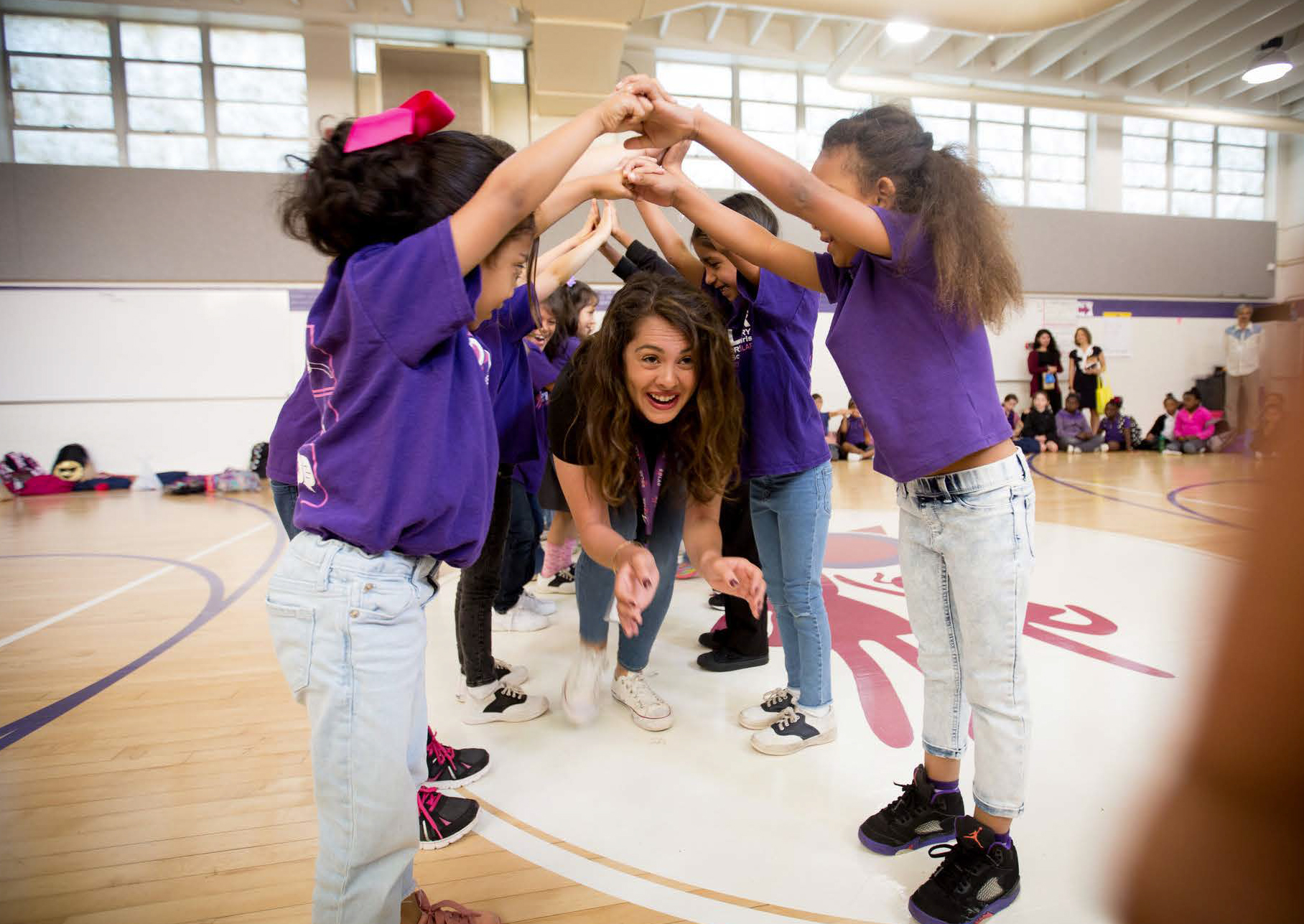 Michael Hinojosa was about to enter the ninth grade in Dallas when a federal judge ordered the city’s public schools to integrate.

DALLAS — Michael Hinojosa was about to enter the ninth grade in Dallas when a federal judge ordered the city’s public schools to integrate.

It was 1971, and Mr. Hinojosa, the Mexican-American son of a preacher, was suddenly reassigned to a new school, whose football coach told him that it was too late to join the squad — its roster had been set months earlier.

“I had a traumatic experience” with desegregation, Mr. Hinojosa said.

So, too, did Dallas. Like many cities, it replaced one form of segregation with another, as white and middle-class families moved to the suburbs or put their children in private schools.

Now Mr. Hinojosa is the superintendent, and the Dallas school system, one of the country’s most segregated urban districts, has become a national leader in trying to figure out how to encourage students of all backgrounds to willingly go to school together.

Two years ago, under Mr. Hinojosa’s predecessor, the Dallas schools set a goal of starting more than 35 new schools by 2020. Through this effort, Mr. Hinojosa hopes to reverse enrollment declines and increase student achievement, while wooing college-educated and white families that may have never before considered public education in Dallas.

Some of the schools, in fact, make no secret of whom they are trying to draw: Half of their seats are reserved for students from middle- or higher-income families, and some are set aside for students living outside the district.

“Every major city in America has to find some way to deal with this issue,” Mr. Hinojosa said. “When you have a mix of kids, the affluent kids don’t suffer and the children of intergenerational poverty do better.”

Dallas is one of just a handful of cities trying ambitious integration programs, even though nationwide, public schools are more segregated today than they were in 1970.

A third of black and Hispanic students attend schools that are more than 90 percent nonwhite, according to research from the Century Foundation, and those racially segregated schools are overwhelmingly low-performing. Research shows that poor children who attend school alongside more privileged peers score higher on standardized tests and earn more money as adults.

But fearful of stoking a fresh round of middle-class flight or another busing revolt like Boston’s in the 1970s, most cities have shied away from addressing the issue.

A typical approach is New York’s, where gifted programs and magnet schools have not made a great dent. This month, Mayor Bill de Blasio released a diversity plan that promised to decrease the number of schools in which low-income children are isolated from middle-class peers.

There has historically been little interest in the issue in Washington. In March, the Trump administration announced that it would end a small grant program for districts hoping to diversify their student bodies.

That makes Dallas, which has even produced a marketing campaign to promote its integration efforts, an outlier.

The effort is small for now, involving fewer than one in 10 city schools, and has not been a total success. One strategy, called “innovation schools,” tries to make neighborhood schools more attractive by installing programs like the International Baccalaureate curriculum, similar to Advanced Placement. It has improved test scores, but has not yet significantly changed the demographics of the schools, many of which are in middle-class areas but serve few middle-class children.

Rather than admit students by grades, test scores or auditions, which tends to turn schools into enclaves of affluence, these schools admit them by lottery, with no admissions standards. They are organized around popular themes like single-sex education, science, the arts, bilingual classes and professional internships.

Most strikingly for a district where 90 percent of students are low-income, the district is setting aside seats in several of the new schools for students who do not qualify for free or reduced-price lunches, even if they live in suburbs outside the district. Those coming from other districts do not have to pay tuition, and though Dallas will not receive school property taxes from their families, it will get funding from the state for each traveling student.

By relying on income instead of race, Dallas is following guidelines from the Supreme Court, which in 2007 declared it unconstitutional to consider race as a factor when assigning students to schools.

“What’s exciting about what Dallas is doing is you have a district that’s 90 percent low-income,” said Richard D. Kahlenberg, an expert on school segregation at the Century Foundation, a liberal think tank. “So many people look at that and say, ‘Therefore, we can’t integrate.’

“That’s not right,” he continued. “You can begin with a small subset of schools and try over time to build the reputation of the school district among middle-class people.”

Dallas has plenty of white and college-educated parents to draw from. The region is the nation’s second-fastest-growing, with an economic boom driven by the financial services and health sectors. On weekday evenings, throngs of well-heeled, mostly white urbanites take to the Katy Trail, an elevated, tree-lined path north of downtown. They walk their dogs, stroll with their babies and jog while wearing university T-shirts and expensive sneakers.

But these people have not enrolled their children in public schools, with the exception of a few coveted neighborhood schools and selective magnet programs. The district’s student population is 93 percent Hispanic and black. In the 1960s, before court-ordered desegregation, more than half the students were white.

The Rev. Andrew C. Stoker, senior minister of First United Methodist Church of Dallas, sends his two sons, who are white, to Hispanic-majority public schools. But he estimates that three-quarters of his congregants send their children to private schools.

Mr. Stoker said he heard a variety of concerns from church members about the Dallas schools, first among them, “Is my child safe?” (According to the most recent state data, Dallas experienced major disciplinary incidents, like fights and drug and weapons offenses, at about the same rate as the state average.)

The idea of catering to parents like these was, at first, controversial. Past desegregation efforts, based on involuntary busing and selective schools, offered little to poor, nonwhite children. The transformation program is also costly; the district renovated several school buildings and is busing students — voluntarily — across the city.

Joyce Foreman, a school board member who represents working-class southwest Dallas, said she supported the integration push and believed the new schools gave her constituents more options. But she said the cost of expanding these programs must be weighed against the needs of older schools that serve largely poor families.

“I am looking at the numbers of students per nurse or counselor” in traditional schools, Ms. Foreman said. “We want to make sure we don’t oversaturate ourselves with choices.”

Mr. Hinojosa, who is on his second stint as superintendent, began his education career in 1979 as a Dallas middle school history teacher and basketball coach. He sent all three of his sons to Dallas public schools.

He inherited the desegregation plan from the previous superintendent, Mike Miles. Several staff members working on integration have recently left the district, but Mr. Hinojosa said he was nevertheless expanding the effort.

This spring, 1,705 students applied for 613 spots in the five existing transformation schools. More than a quarter of applicants are currently enrolled in private or charter schools or live outside the district, and 15 percent are white, a demographic profile very much outside the district’s norm.

The most lauded of the new schools is Solar Preparatory School for Girls, which emphasizes the sciences and art. On a recent morning, a teacher, Nicolette Luna, asked her uniform-clad first graders to pair up to discuss the meaning of a new vocabulary word: “humility.” Later in the day, the class took a trip to an environmental center.

The school has become so popular with well-off families that administrators have had to step up recruitment in low-income neighborhoods, in order to meet the requirement that half the students qualify for free or reduced-price lunches. The student body is 51 percent Hispanic, 22 percent black, 22 percent white and 2 percent Asian.

Not all of the transformation schools are that diverse. At the Innovation, Design, Entrepreneurship Academy, or IDEA, a high school that places students in professional internships as early as 10th grade, about 80 percent of students receive free or reduced-price lunches, and only eight students are white.

One of the eight, an aspiring architect named Aiden Dornback, left a popular charter school because he and his parents did not like what they considered its emphasis on test preparation.

Aiden’s mother, Sarah Dornback, said she was comfortable with her son’s being in the demographic minority at his new school — even though it makes their family a subject of curiosity among people in their social circle, many of whom send their children to private schools or have moved to suburbs like Frisco or Prosper.

“My husband and I both went to suburban, white high schools,” Ms. Dornback said. “It’s not a reflection of real life.”

Mr. Hinojosa acknowledged that for now, families like the Dornbacks were the exception. Some principals have complained, he said, that while college-educated parents are increasingly “window shopping” at their schools, they do not necessarily return to enroll their children.

Mr. Hinojosa hopes that will change. But ultimately, he said, “if parents can’t get over race or class, they’re not going to put their kids in our schools.” 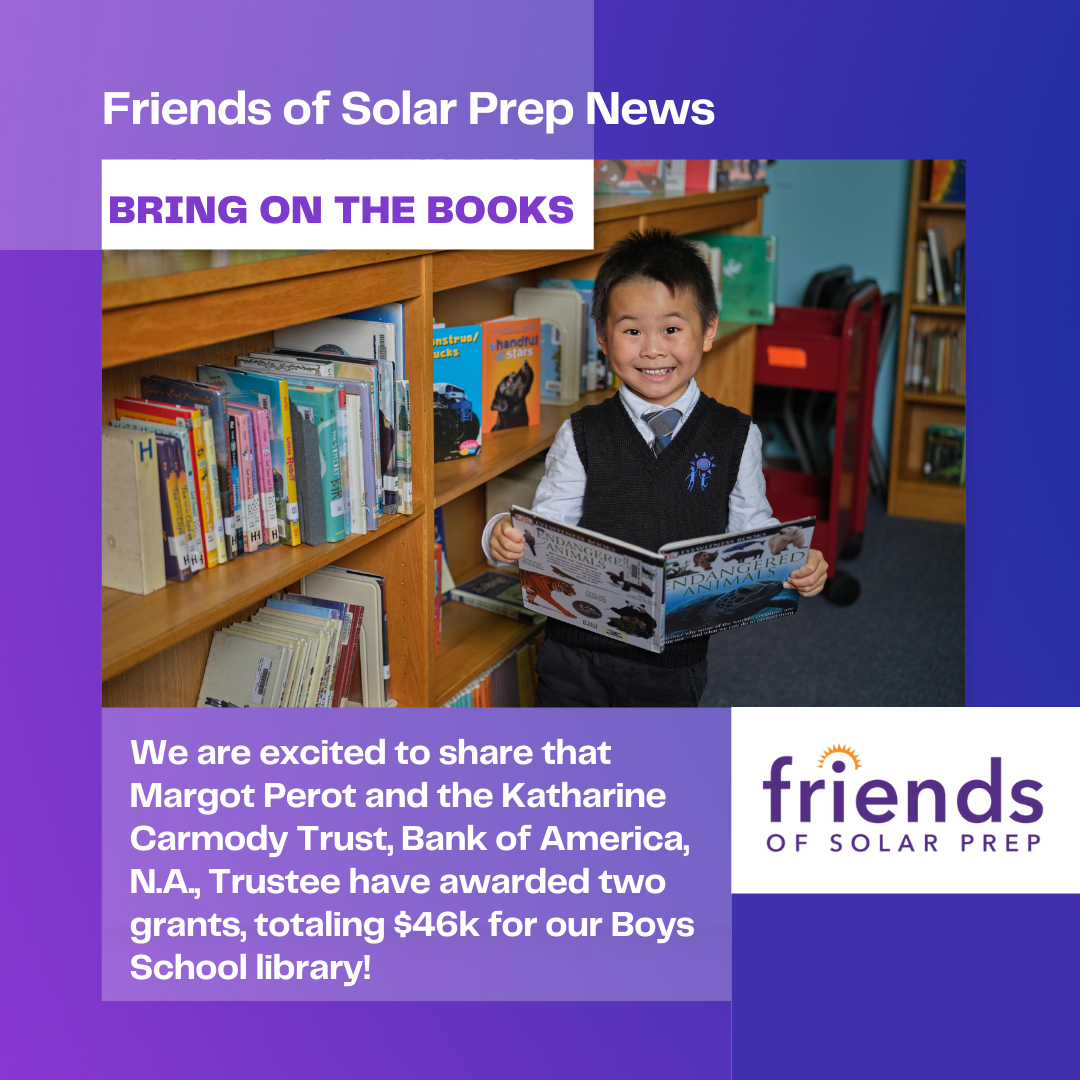 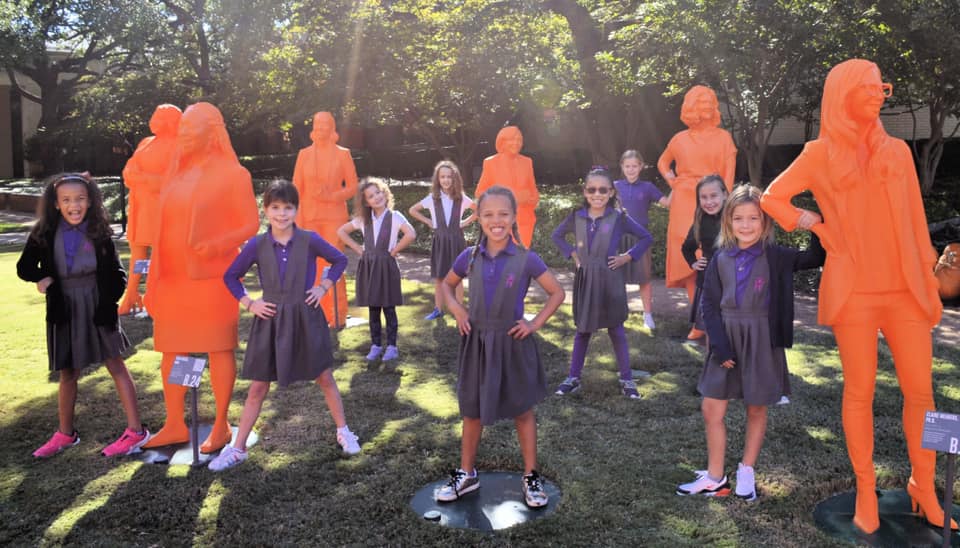 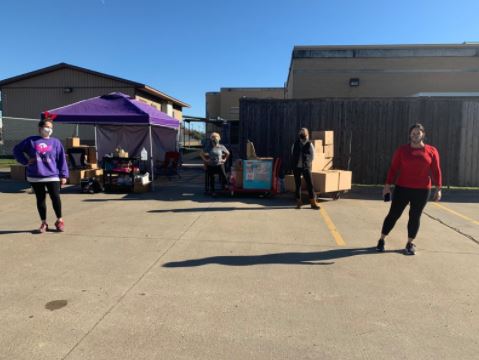 2020 Volunteer of the Year: Meghan Griffith

Impact with action! Giving back to Scholars and their families! 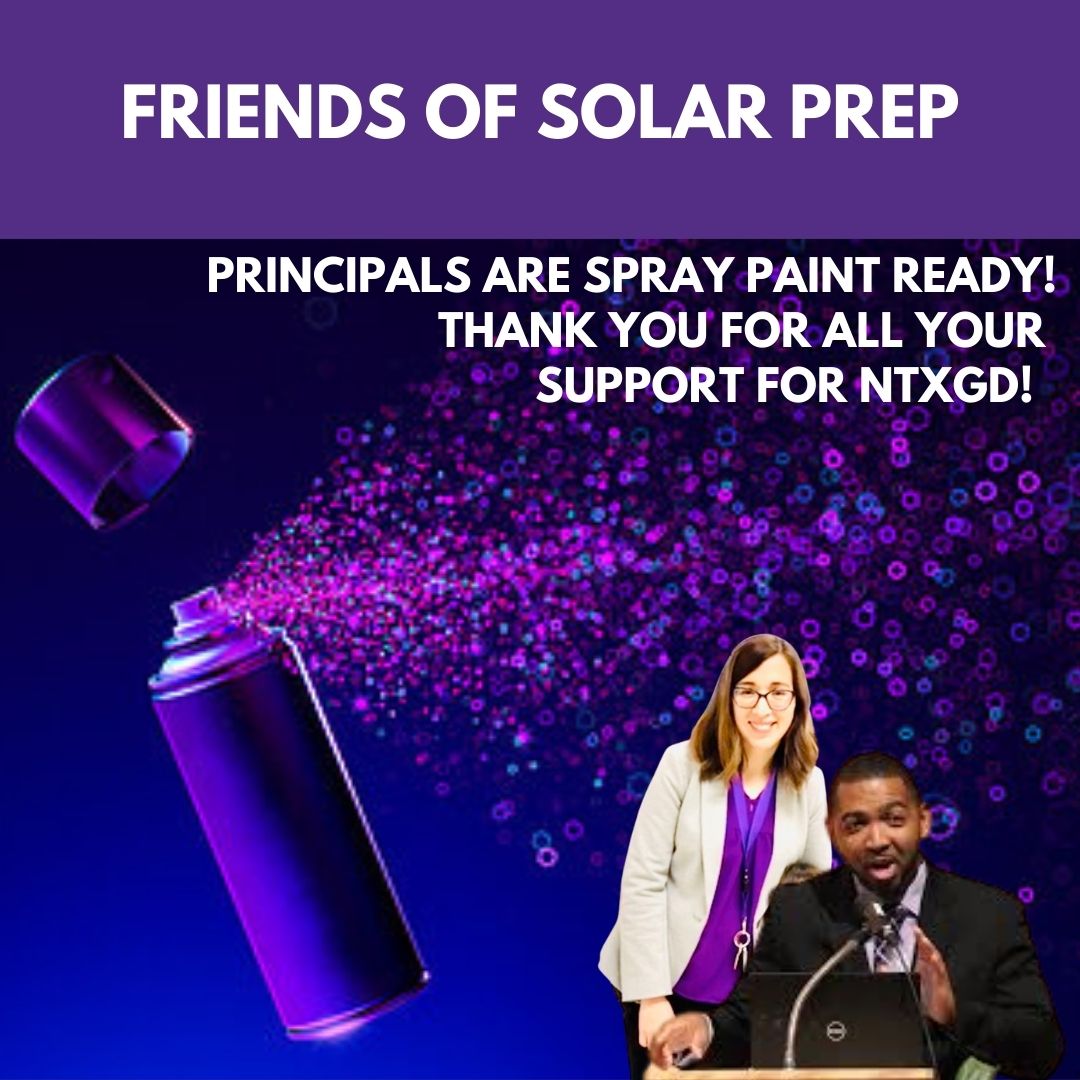 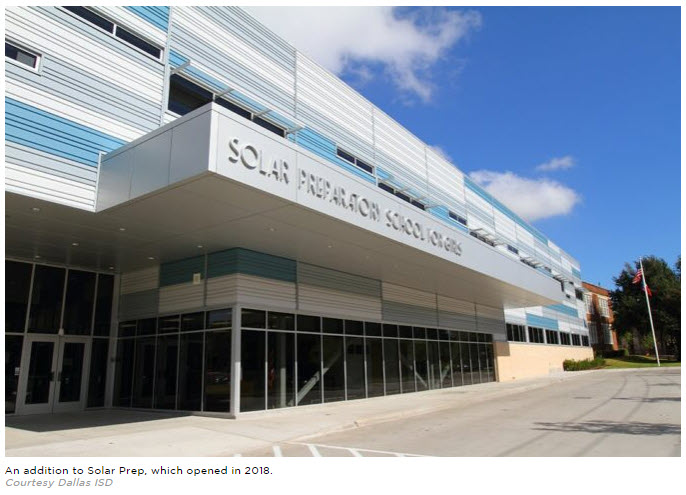 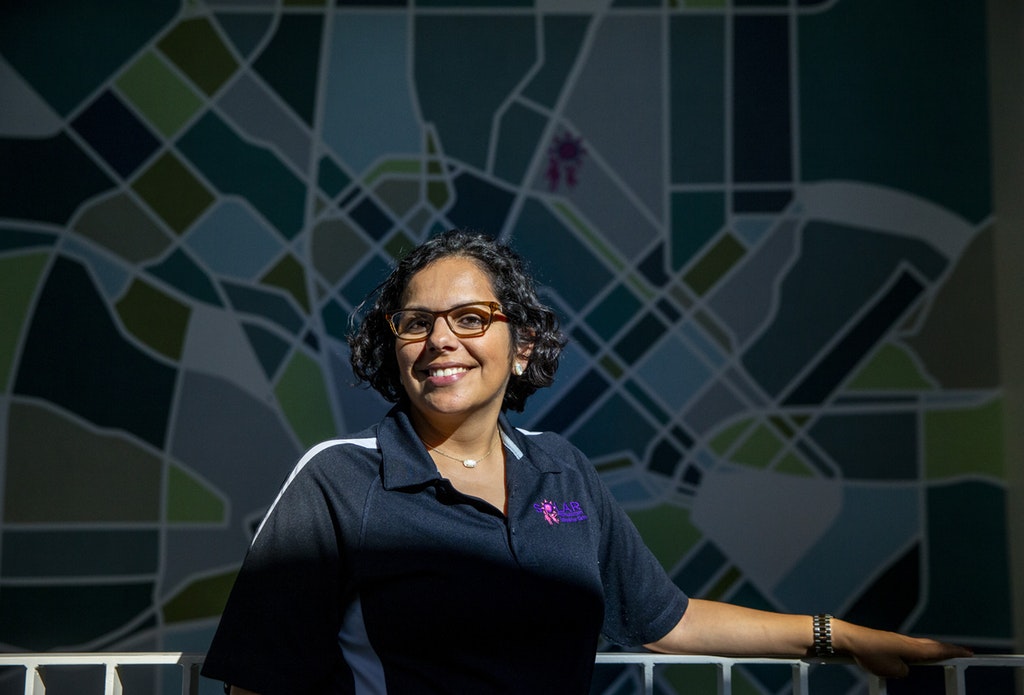 Nancy Bernardino is living her dream: devoting herself to empower girls to become the leaders of the future.

As principal of Solar Preparatory School for Girls in Old East Dallas, Bernardino works to inspire and prepare girls to build a more equitable and fair society.